A swimmer, paddle boarder, kayaker, hiker and all-around outdoor adventurer, Chris’ adventures reflect the thrills and challenges of enjoying all aspects of nature and finding simplicity in life. From swimming across Lake Michigan to paddleboarding North Carolina’s French Broad River, Chris’ adventures on  water have given him a unique perspective on life and living as part of our natural world. 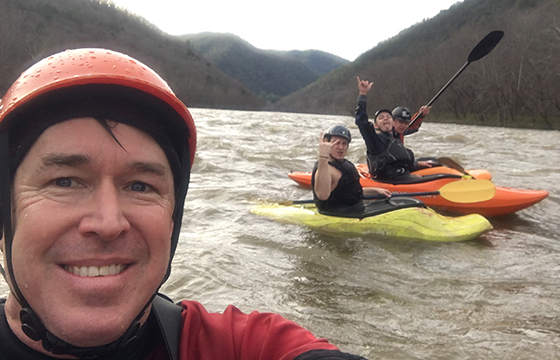 Chris started competitive swimming at age 12, starting a habit of swimming that would last a lifetime. He competed in butterfly and distance swimming as an age grouper and in high school and again as a masters swimmer in his 40’s.

His teens is when he also began kayaking, where he got his first paddles in the Elkhart River near Goshen, Indiana. Sometimes, he would board his kayak and take off Friday, not returning again until Sunday. His first whitewater experience was on the French Broad River section 9.

He continues his adventurous journeys even to this day. He’s been known to swim 8 to 10 miles on Lake Fontana on a Saturday, camp on an island for the night, and swim back on Sunday. 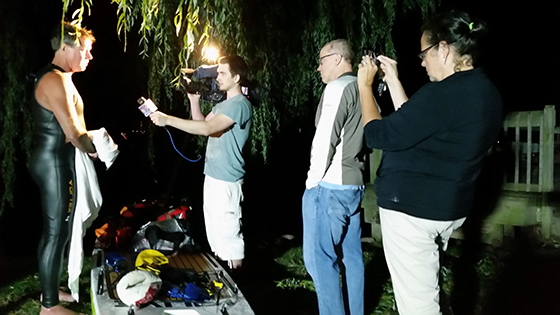 Chris would not be able to embark on his adventures without the help and support of his family, especially his wife Jana. It was Jana who waited on the other side of Lake Michigan for Chris to complete his dangerous, 80-mile journey. And it was Jana that met Chris at stops along the way of the French Broad River, keeping spirits high. He also has four children.

“My adventures are a gift given by my wife and family,” Chris said.

Chris is an accomplished orthopedic surgeon specializing in the hand and has been a part of the staff at Carolina Hand and Sports Medicine in Asheville, N.C. for more than 20 years.

Chris is a Fellow in the American Academy of Orthopaedic Surgery and a member of the American Society for Surgery of the Hand. He received Board Certification in Orthopaedic Surgery in 1995 and Certificate of Added Qualifications in Surgery of the Hand in 1997. He’s received additional hand surgery training in England, Germany, France, Switzerland, India, Singapore, and Australia.

Chris earned his Bachelor’s Degree at Indiana University and his Doctor of Medicine Degree from Ohio State University College of Medicine. He performed his residency in surgery at Mount Carmel Medical Center in Columbus, Ohio, and his orthopedic residency at the University of North Carolina at Chapel Hill. He also served a fellowship at the Indiana Hand Center in Indianapolis, Indiana.

In 2011, Chris performed groundbreaking surgery to reattach the hand severed from an Asheville teen after a car accident caused by a drunk driver. After 9 hours of surgery, he was able to save Kyra Arias’ hand without significant loss of function, helping to speed her recovery and return to normal life. 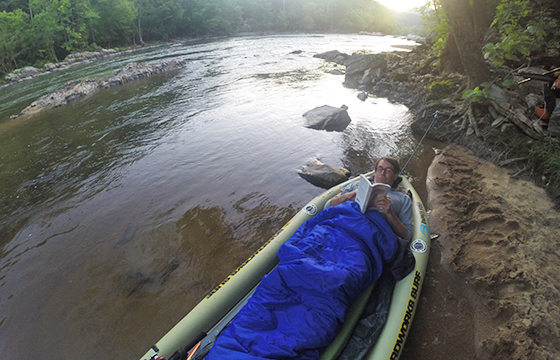 Chris’ adventures are inspired by a lifetime of outdoor living, starting from his early days exploring the Elkhart River in Indiana. His imagination was also fueled by the writing of some of his favorite authors like Robert Louis Stevenson, Thor Heyerdahl and Mark Twain.

“I had the good fortune to be raised a Huck Finn kid,” Chris says.

He was inspired at a young age by Thor Heyerdahl, the Norwegian explorer who led the 1947 journey by raft across the Pacific Ocean from South America to the Polynesian islands. Wilma Dykeman, author of the classic ecohistorynovel The French Broad River was another influence.

“Her love for the river was palpable,” Chris says. “She made me think of the river as a Grand Character in a Grand Play. Marshall, NC became, for me the beating heart of this living waterway.

More on Chris from the Asheville Citizen-Times: